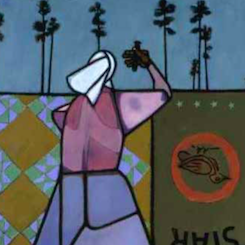 The Keith and Nadine Pierce Lecture on American Art

The annual Keith and Nadine Pierce Lecture on American Art will be presented online by Jody Patterson, Associate Professor, Roy Lichtenstein Foundation Chair of Art History at Ohio State University, on November 22 at 2:00 pm. The title of her lecture is From Out of the South: Robert Gwathmey and the Picturing of the Human Condition. Robert Gwathmey (1904–1988) was an American painter who chose Southern life, particularly the experiences of African Americans, as his subject matter. An eighth-generation white Virginian whoseworks re ect the in uence of 19th- and 20th-century European art, Gwathmey combined bold colorsand stylized forms to create vivid images of the widespread rural poverty and racial injustices he witnessed in the South. The lecture will explore Gwathmey’s abiding commitment to social realism and political activism during the 1940s. Refusing to engage in the abstract vocabularies of contemporary New York School painters, he chose instead to focus attention on racial and economic inequalities. Thanks to the generosity of longtime Museum supporters Keith and Nadine Pierce, this program is free, registration requested.