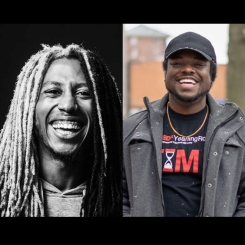 CMA is hosting a Teen Film Summit on February 19 for teens, aged 13- 19.
Hakim Callwood, Ted Cadillac and Donte Woods-Spikes will each join us for artists talks. Artists will host a Q & A with teens, where they share how film and media play a role with their creative pursuits.
Hakim Callwood is a Columbus raised artist who specializes in illustration, design, teaching, and painting. He is currently traveling, hosting, and creating for Tour de Mural.
Tour de Mural was inspired by a local mural tour completed by Hakim in 2019. The goal of Tour de Mural is to travel the United States and beyond, painting murals, connecting with artists and the communities they reside in, and sharing their stories.
Ted Cadillac is a video producer from Pittsburgh, PA and Ohio University alum. Starting in 2012, Ted spent 4 years traveling with music acts ranging from Fly Union to Juicy J and Wiz Khalifa, documenting their careers in YouTube web series. Now based in Columbus, OH, Ted just released the debut music video for Stranger Things star Caleb McGlaughlin titled “Neighborhood,” and is prepping for the 2nd season of his collaborative documentary “Tour De Mural” with artist Hakim Callwood.
Topic Description: How we made a web series and took it on the road.
You can find more information on Tour de Mural, as well as links to our videos at www.tourdemural.com
Donte Woods-Spikes is known for various forms of work such as professional speaking which landed him on the TEDx Stage and multiple conferences. His community work involves projects such as A Talk With Our Sons and Empathize With Me which explores social issues and personal narrative through interviews. His documentary work includes films As a Matter of Black(Sundance Film Festival) and Donte and Day’Mariah.
Donte's overall goal is to educate and connect the world beyond perceptions and stereotypes with authentic experiences through storytelling and documentation.
Topic Description: If you have access to a camera, you can turn anything into a story.
Join Donte Woods-Spikes as he shares how he used his everyday life experiences and turned them into films. www.dontewoods-spikes.com
In addition to the artists talks, teen will be provided with drinks and snacks. Additional creative experiences will be hosted by the CMA Studio. This is a FREE drop-in program that does not require registration.
Made possible by funding from PNC Arts Alive