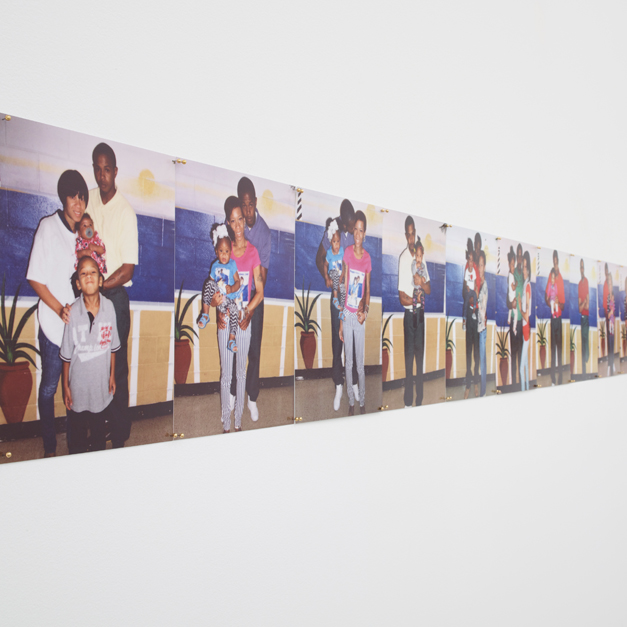 Original CMA exhibition Family Pictures explores the ways in which black photographers and artists have portrayed a range of familial relationships, from blood relatives to close-knit neighborhoods to queer communities.

Beginning with Roy DeCarava and Langston Hughes’s groundbreaking 1955 book The Sweet Flypaper of Life, the exhibition gathers photographic series, installations, and videos by an intergenerational group of artists, including John Edmonds, LaToya Ruby Frazier, Lyle Ashton Harris, Deana Lawson, Lorraine O’Grady, Gordon Parks, Sondra Perry, Ming Smith, and Carrie Mae Weems. Their images of family life often maneuver between intimate, everyday stories and broader political realities, between the universal human condition and the particular histories of race in the United States. As Lawson says of her work, “Every day is political, the everyday is personal.”

A touchstone for several of the artists in the exhibition is the work of Roy DeCarava (American, 1919-2009). Coming of age in Harlem during the 1940s, DeCarava reacted against what he saw as superficial stereotypes and “sociological” studies of his neighborhood by mostly white outsiders. With the aid of a Guggenheim Fellowship in 1952, the artist set out to create expressive photographs of life in his community. He eventually published 140 pictures along with text by Langston Hughes in The Sweet Flypaper of Life (1955), a fictional family album that tenderly captures intimate moments of domestic life both in Harlem and seemingly everywhere.

Family Pictures is funded in part by a grant from Puffin Foundation West, Ltd.

A Community Conversation on Family
February 14, 2018, 3:00 PM-5:00 PM
How do you define family? What are family values? Who determines what makes a family? What are the structures that challenge these new notions of family units today? These are the questions we’ll explore as part of a community conversation on family inspired by the Columbus Foundation’s Big Table conversations, which bring people together to talk, listen, and learn from one another. The afternoon will conclude with an optional preview of the Family Pictures exhibition with artist John Edmonds. Partners for this conversation include Creative Control Fest, Ethiopian Tewawhedo Social Services, Black, Out and Proud, Equitas Health, and Documentary photographer Tariq Tarey. This program is free and open to the public. Registration is requested as space is limited. To participate in this community conversation please register here.

CANCELLED Artist’s Talk: Deana Lawson
May 17, 2018, at 6:00 PM
THIS PROGRAM HAS BEEN CANCELLED. DETAILS ABOUT RESCHEDULED PROGRAM TO FOLLOW SOON. Join CMA on Thursday, May 17, 2018, at 6:00 PM at Columbus Museum of Art for an artist talk with Deana Lawson. This program is free and sponsored by The Contemporaries, an interest group of the Columbus Museum of Art. The talk will take place in the Cardinal Health Auditorium.

Artists in the Exhibition
Brooklyn-based John Edmonds (American, born 1989) has been photographing friends, family, lovers, and strangers since his college days in Washington, D.C. For Edmonds, who earned his MFA from Yale University in 2016, the process of image-making is a collaboration—the process of building relationships and community. This installation, specifically made for the exhibition, recalls the format of an altarpiece, a work of art that decorates the space above and behind the altar in Christian churches. The lush portraits of young, black men and women explore intimacy and beauty as ways of understanding.

For her project Notion of Family, the artist LaToya Ruby Frazier (American, born 1982) photographed herself and her family whose “lives parallel the rise and fall of the steel mill industry” in Braddock, Pennsylvania, a suburb of Pittsburgh. Partly inspired by Gordon Parks’ idea of using the camera as a “weapon” of choice against racism, intolerance and poverty, Frazier’s pictures counter the continued omission of African-American life and histories in both Braddock and the United States.

Since the late 1980s, Lyle Ashton Harris (American, born 1965) has been photographing family and friends as well as drawing upon his own photo archives. The exhibition includes a selection of large-scale posed family portraits from his first one-person show The Good Life in 1994 along with images from his Ektachrome Archive, which the artist photographed between 1986 and 2000. These formal portraits and snapshots provide an intimate look at a community and a subversion of various notions of familial, sexual, and racial identities.

Like many artists in the exhibition, Deana Lawson (American, born 1979) draws upon the tradition of the family portrait and snapshot for much of her work, whether her photographs depict her own family members or that of others. For a large-scale photographic installation, Mohawk Correctional Facility (2013), which CMA acquired earlier this year, Lawson appropriates 46 snapshots that track a young woman and her child’s visits to see their partner and father in a state prison.

In a 1980 performance, Lorraine O’Grady (American, born 1934) juxtaposed images of her family members with Ancient Egyptian sculpture that created parallels between her personal and diasporic histories. Miscegenated Family Album (1994), a series of photographic diptychs that originated from that performance piece, examines the troubled relationship between O’Grady and her deceased sister, Devonia Evangeline by comparing Egyptian queens Nefertiti and Mutnedjmet, who scholars have proposed were sisters. As the artist says, her work attempts to “make the historic personal and the personal historic.”

The photographs of Gordon Parks (American, 1912-2006) are equally important to many of the artists in the exhibition. In 1967, Parks documented the daily life of the Fontenelles, a family living below the poverty line in Harlem. The pictures, along with an essay, were published in a special section of the March 8, 1968 issue of Life on race and poverty entitled “The Cycle of Despair: The Negro and the City.” A selection of photographs along with copies of the original magazine will be on view.

For her two channel video, Lineage for a Multiple Monitor Workstation: Number One (2015), Sondra Perry (American, born 1986) created a semi-autobiographical narrative about her family. The multiple windows on dual computer screens feature moments like the ritual burying of her grandmother’s American flag, the collective peeling of sweet potatoes, and a gathering for a family portrait. These reconstructed and fabricated family traditions present identity as entirely mutable in the digital age.

Ming Smith, who grew up in Columbus, was a member of New York’s Kamoinge Workshop and the first black female photographer to have work acquired by the Museum of Modern Art in New York. In the early 1990s, Smith retraced the steps of playwright August Wilson in the Hill District of Pittsburgh, photographing people and places that could have featured in his plays and that ennoble ordinary black life. Smith originally imagined the series would be accompanied by Wilson’s text, much like Langston Hughes’ text for DeCarava’s pictures in The Sweet Flypaper of Life.

Carrie Mae Weems’s (American, born 1953) first major body of work, Family Pictures and Stories, 1978–84, is perhaps the clearest homage to both the work of DeCarava and Parks. The photographs and accompanying text and audio create a complex portrait of a middle-class African American family that is meant to stand in contrast to a 1965 report written by Assistant Secretary of Labor Daniel Patrick Moynihan, which blamed “the deterioration of the fabric of Negro society” on a weak family structure. Weems (American, born 1953) began the work while completing an MFA at the University of California, San Diego, where the late artist Allan Sekula created a similar installation about this family, Aerospace Folktales (1973), on view in the historical wing of the museum during the run of the exhibition. 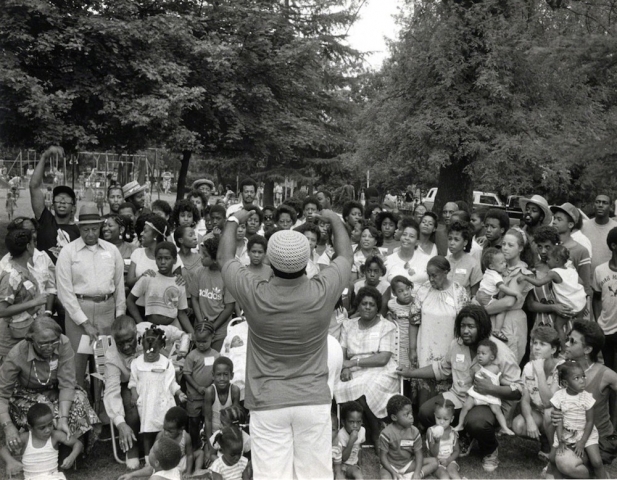 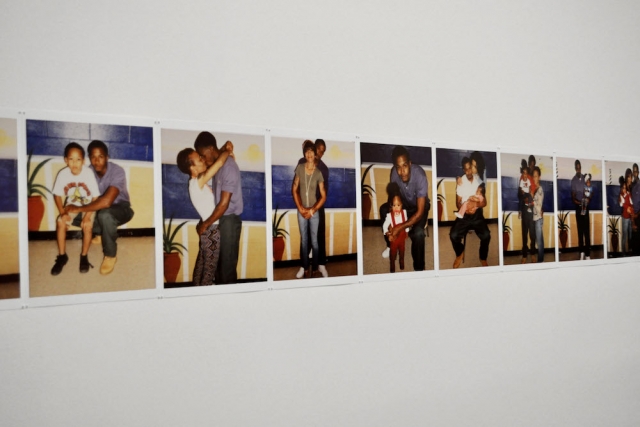 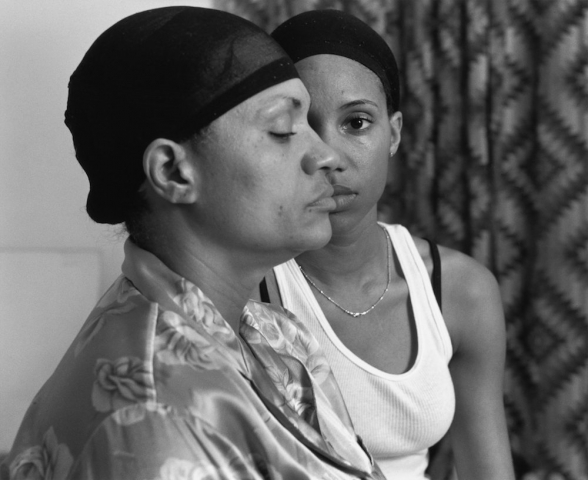 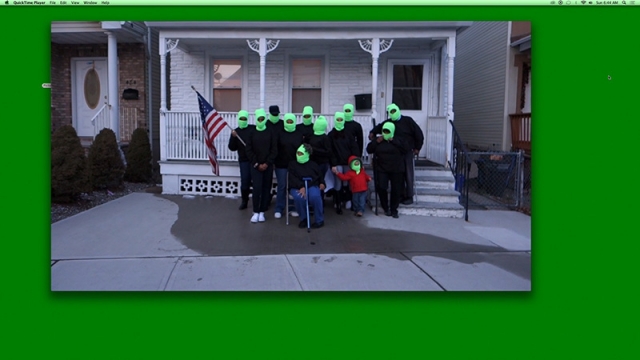 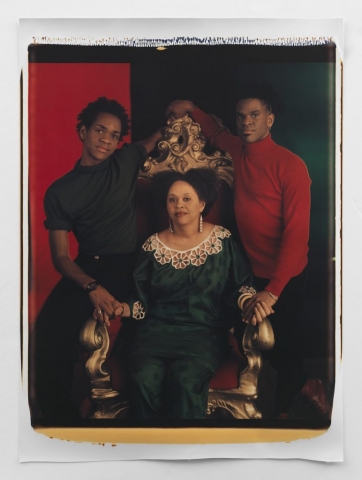 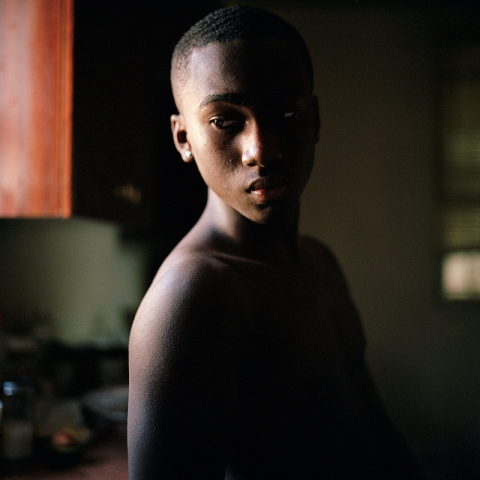