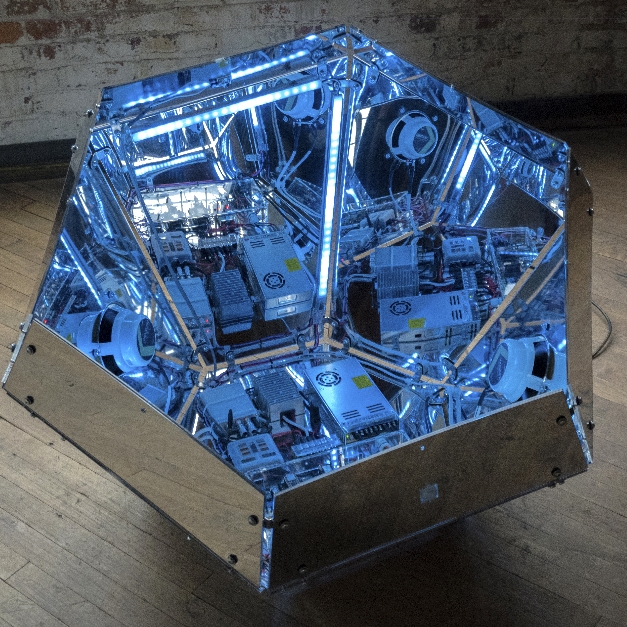 Presented biannually from this year, Greater Columbus features work by outstanding artists based in central Ohio. The exhibition represents a partnership between the Columbus Museum of Art and the Greater Columbus Arts Council.

On behalf of the Arts Council, a jury of distinguished arts professionals working outside the region awarded Individual Artist Fellowships to Christopher Burk, Molly Jo Burke & Nathan Gorgen, Nick Larsen, and Laura Larson. Greater Columbus features their work alongside two artists, Daric Gill and Chaz O’Neil, who were selected for residencies in Dresden, Germany as part of the Arts Council’s Artist Exchange Program. Working in various media, these artists represent a diverse range of practices fostered within the region’s artistic community.

Jurors for the 2019 Individual Artist Fellowship Awards were Gianna Commito, an artist and professor of painting at Kent State University; Courtenay Finn, Chief Curator at moCa Cleveland; and Gilbert Vicario, Deputy Director for Curatorial Affairs and the Selig Family Chief Curator at the Phoenix Art Museum.

Through this partnership, the Museum and the Arts Council support the arts and advance cultural development in the Columbus area. The Arts Council’s Individual Artist Fellowships program was established in 1986. Since the inception of the program, hundreds of artists have received awards in a variety of disciplines, including the visual arts, crafts, film and video, creative writing, music composition, and choreography/movement arts. Chaz O’Neil is fascinated by space exploration, and this body of work reflects his interest in the messages that humans have sent into outer space in search of intelligent life. The repeated image in his Messenger Series is taken from the etched plaque designed by renowned astronomer Carl Sagan for NASA’s Voyager and Pioneer spacecraft. The plaque contains informational diagrams about human beings and the location of Earth in the infinitesimal chance that the spacecraft are intercepted by extra-terrestrial life forms.

O’Neil’s process of making these works involves a tension between control and chaos. The cut-out shapes that form regular grids and patterns are mathematical in their precision, while his spray paints, washes, and other use of pigments and resins open the work up to chance. Inspired by a visit to Terra Mineralia, a museum in Freiberg, Germany housing one of the world’s largest collections of minerals, the vinyl installation Terraform (2020) is one of O’Neil’s most ambitious works to date.

O’Neil works and teaches at Otterbein University, Ohio. He also taught at Shanghai Publishing Printing College in China. Recently, he had residencies in El Bruc, Spain as part of the Ohio Art League Can Serrat Residency Award. In 2019, he also took part in the Greater Columbus Arts Council’s Residency Exchange Program in Dresden, Germany. Though devoid of people, Christopher Burk’s paintings are meditations on human labor, infrastructure, and impact on the landscape. With his exquisite renditions of utilitarian features of the urban environment, such as power lines and alleyway dumpsters, Burk’s paintings have often had the vantage point of an upward gazing pedestrian.

Burk’s more recent works, however, were inspired by media images of Hurricane Florence in 2018. They depict flooded rural landscapes from an aerial perspective. His tightly cropped compositions emphasize the curving boundaries of roads or forests, and are marked by the shadows of clouds overhead. Burk’s flooded houses and landscapes find poignant beauty in scenes of environmental and social catastrophe.

Christopher Burk studied at the Columbus College of Art & Design and at the Myers School of Art at the University of Akron. Burk has exhibited extensively in Ohio as well as nationally, including shows in New York City, Santa Fe, and Chicago. In 2018, Burk was awarded a Pollock-Krasner Foundation Grant and was featured in a solo exhibition, Illuminating the Everyday, at the Springfield Museum of Art. In 2019, his work was featured in the ConnectArt exhibition in Matanzas, Cuba. Daric Gill is an interdisciplinary artist whose work encompasses highly illusionistic oil painting, graphic illustration, and interactive robotic sculptures. His centerpiece for this exhibition, The Circadian Machine, is an internet-connected, jewel-like pod that displays undulating lights and sound, tells time, and performs numerous actions depending on the sun’s relative position to the sculpture on Earth. The work is also responsive to the presence of people nearby.

With musical arrangements composed by the artist, The Circadian Machine’s “clock” chimes cords based on the Circle of Fifths, a 12-positioned wheel representing the relationship between different elements of the chromatic scale. Marrying light, music, time, and place, The Circadian Machine connects harmonic frequencies with the rhythms of life under the sun.

Gill also shows another facet of his practice with selected highly illusionistic paintings, including Absolute: Thread, a delicate painting about memory and transience painted on an antique German violin. In addition to exhibitions in Ohio, Daric Gill’s work has been shown in Ohio, New York, New Jersey, and Los Angeles, as well as internationally in South Korea and Cuba. Gill is a recipient of the 2018 Visual Arts Fellowship from the Greater Columbus Arts Council, the 2019 Ohio Arts Council Individual Excellence Award, and the 2019 Artist Exchange in Dresden, Germany. The protagonists of Laura Larson’s City of Incurable Women are depicted in a series of enigmatic escapes. These fugitives—tenacious, exhausted, ambivalent—move nervously within the frame. Each woman looks away from the camera or conceals her face. Larson writes:

“I’m interested in how the body can telegraph the complex experiences of these women through gesture and the stories lurking behind these movements. How can the body allude to the private history of a consciousness? Of suffering? Of pleasure? How can it act as a screen for the social and political influences that shape lived experience? The project draws its inspiration from multiple sources: archival images of women treated for hysteria, nineteenth-century hidden mother photographs, documentation of the Judson Group’s dance performances, photographs of political protest. Collapsing documentary realism and directorial artifice, my process reflects the strategy of looking between the visible—the historical—and the speculative.”

Laura Larson is an artist and writer based in Columbus, OH. She’s exhibited her work extensively at such venues as Art in General, Bronx Museum of the Arts, Columbus Museum of Art, Metropolitan Museum of Art, Museum of Fine Arts, Houston, SFCamerawork, Susanne Vielmetter/L.A. Projects, and Wexner Center for the Arts. Her first book, Hidden Mother (2017), was shortlisted for the Aperture-Paris Photo First Photobook Prize. An artist and designer couple as well as parents of young children, Molly Jo Burke and Nathan Gorgen’s collaborative works are concerned with the environment, waste, and the nature of everyday materials and objects. As individual artists, the two have very different practices; their collaborative work is made from the excess material left over from their respective artistic processes.

In their newest series, Burke and Gorgen have also begun to use objects collected from their domestic life, such as unused children’s items and leftover components from home improvement projects. Playing with the viewer’s perception of these materials’ purpose, quality, and value, Burke and Gorgen heighten or obscure their nature with a variety of coatings, such as plaster, wax, epoxy, and faux painting—all of which are also left over from other projects. The imaginative recycling and repurposing of materials in these works compels the artists to address their own waste stream. Transformed into works of art, the byproducts of their creative and domestic lives are a reflection on the themes of togetherness, play, architecture, and the landscape. Nick Larsen, QM 005 (Beyond the Pines), 2020. Mixed media on found and digitally printed fabric. Courtesy of the artist.

Queer Mountain is an uninhabited high-desert wilderness northeast of Death Valley, and it is difficult to see. I tried, unsuccessfully, two summers ago, after finding it on a map while planning a road trip somewhere else. I made it to the outskirts, but an intense fire season followed by a wet winter had washed out the three roads in, and I was forced to head back the same way I came without seeing any of it. It wasn’t until much later that I started to think of this failed trip—my inability to reach this place—as an analog for a kind of fantasy tethered to landscape. The maps, site overview images, material catalogs, and fictional artifacts of my current work—all forms I discovered during the six years I worked in the archaeological field in Northern Nevada—draw out and articulate this fantasy. The desert is a place defined by what it lacks; in the no man’s land between archaeological inventory and speculative fiction, I’ve found terrain to mine both what’s present and visible and, maybe more importantly, what isn’t.
—Nick Larson

Nick Larsen holds a BFA from the University of Nevada, Reno and an MFA from the Ohio State University. Among his many solo and collaborative exhibitions, his work was included in Tilting the Basin, a survey of contemporary art in Nevada (Nevada Museum of Art, 2015/2016), and several editions of New American Paintings (#131, #135, #143). In 2019, he self-published a book of images, drawings, and writing that straddled the line between autobiography and fictionalized archeological inventory of Queer Mountain, a real, though poorly documented, desert wilderness in western Nevada. 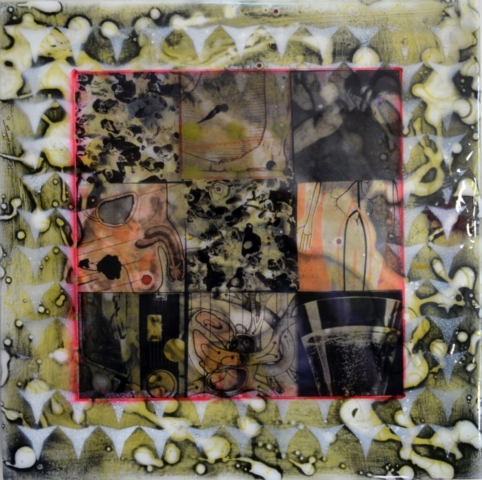 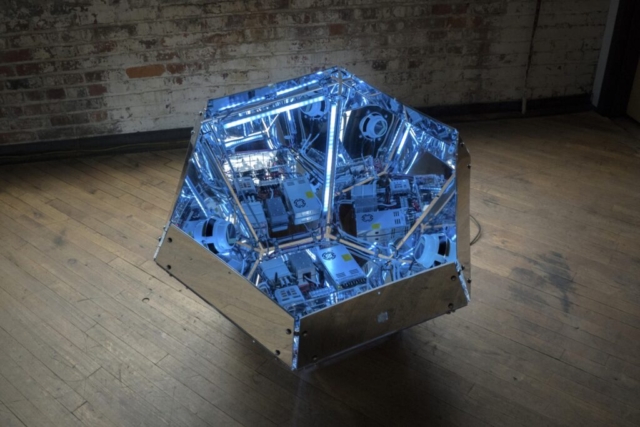 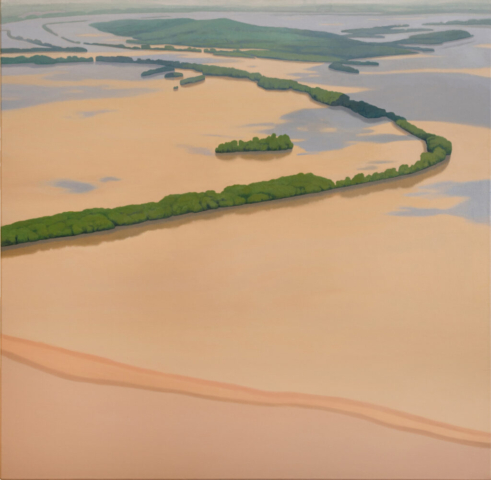 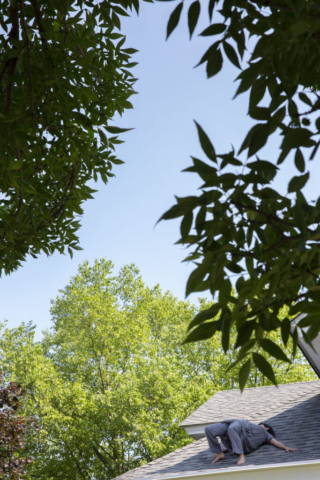 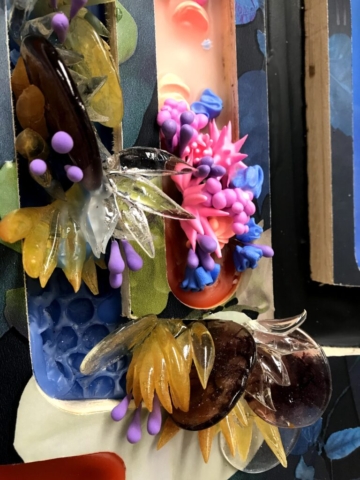 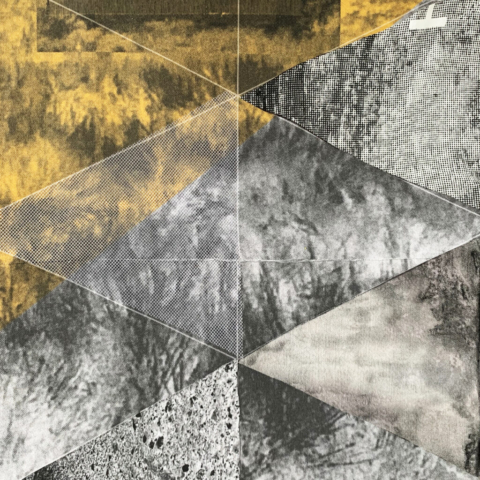