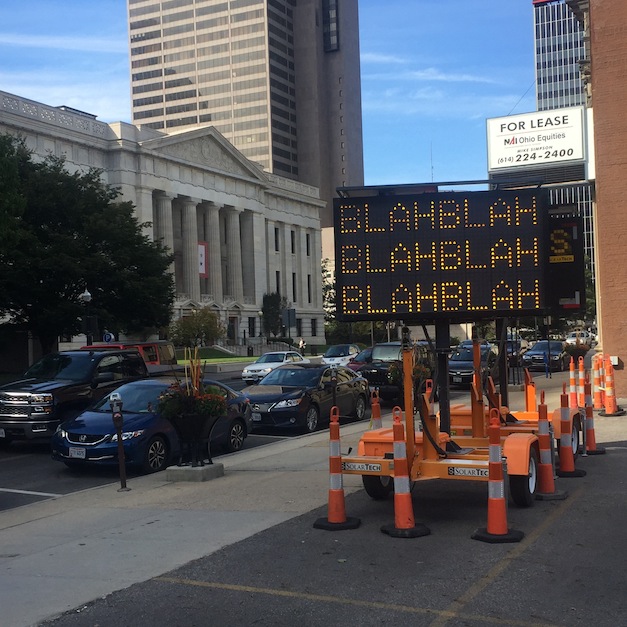 Look out for an LED road sign flashing BLAH BLAH BLAH in downtown Columbus at Third and State streets, and the entrance plaza of Columbus Museum of Art. This temporary sculpture by renowned artist Mel Bochner is a wry commentary on the state of public discourse and our capacity to listen. We tend to use the phrase “blah, blah, blah” to dismiss the statements of people we disagree with. It signals exhaustion with the general noise of every day life, a condition familiar during a Presidential election campaign, and particularly to Ohioans living in a swing state. But who is saying “blah, blah, blah,” and who is dismissing it? We’ve all been in one position or the other. Whether this phrase points to politicians, the media, corporations, the public— or indeed, art itself — remains open to each viewer’s perspective.

Bochner’s BLAHBLAHBLAH sculpture forms part of the I-71 Project, a collaborative exhibition between the Columbus Museum of Art in Columbus, Ohio and the Contemporary Arts Center Cincinnati (CAC). The I-71 Project is co-curated by artist and independent curator Anne Thompson, CAC curator Steven Matijcio, and Columbus Museum of Art Curator of Contemporary Art Tyler Cann.

Also look for Ryan McGinness’s Re-elect Skull & Bones, which appears on a dramatic panoramic billboard (21 x 60 feet) on I-71 North, halfway between Cincinnati and Columbus. You can find the sign about three miles south of exit 45 for Waynesville/Wilmington (GPS 39.4557, -83.9952). Styled as a political ad, the work displays a symbol associated with tombstones, poison, pirates, and a Yale secret society whose former members include U.S. politicians of both parties. Complex and compelling in its many possible meanings, Re-elect Skull & Bones urges rebellion and interrogates our democracy as a closed circle.