Welcome back. Click here to view our new visiting guidelines. 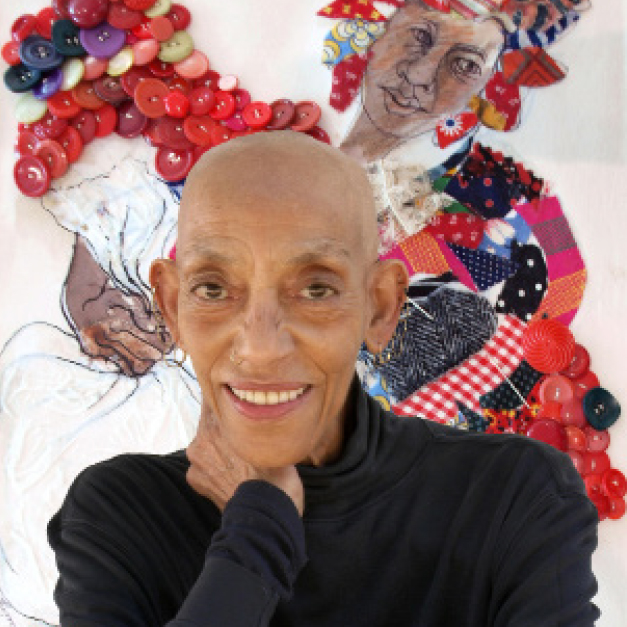 By the time I reached nine years old, I was deep, deep into transforming and recording the culture of my people into works of art. The magnitude of research and study of Afro-Amerikans is what I have dedicated my life to. My works are the missing pages of American history.  Aminah Brenda Lynn Robinson

The Aminah Brenda Lynn Robinson Legacy Project (ABLR Legacy Project) seeks to preserve and present the work of Columbus native and MacArthur Award recipient Aminah Brenda Lynn Robinson (1940-2015), who left her estate to the Columbus Museum of Art. Robinson’s distinct body of work resonates with broad audiences, celebrates the cultural identities of African Americans and confirms human commonalities among all people. Her work articulates childhood memories; the struggles and triumphs she knew as a single mother and Black, female artist; her personal accounts of growing up in Columbus’ Poindexter Village; and her travels to Africa, Europe, and the Middle East. The ABLR Legacy Project includes a variety of programs and efforts including the documentation, preservation, and presentation of her work for current and future generations; the renovation of her home and studio as a base for the Aminah Robinson Residency for Black artists; publication of Aminah’s World, a children’s book; a major CMA exhibition with accompanying catalogue of the same name Raggin On: The Art of Aminah Brenda Lynn Robinson’s Home and Journals, and more.

Take a virtual tour of Aminah Robinson’s home and studio, renovated to preserve the artist’s spirit and to be an inspiring home for Black artists annually awarded the Aminah Robinson Artist Residency.

You can also watch the official Housewarming here.

In 2018, CMA convened the Aminah Robinson House Community Committee, who voted unanimously to establish a residency in partnership with the Greater Columbus Arts Council. We extend our great appreciation to the many individuals and organizations for their enthusiastic support.

Community support for the project was led by Larry James and renovations for the home and studio were generously funded by The Columbus Foundation, Doug Kridler, president and CEO. Architect Robert Loversidge and builder Mark Corna helped envision the project at its earliest stages and Chad Whittington, president and CEO of Columbus Association of Performing Arts, provided eager support.

With the leadership of Executive Director Nannette Maciejunes, CMA staff Rod Bouc, Carole Genshaft, and Deidre Hamlar prepared the house for renovations and work was undertaken and completed by the team of Aaron McDaniel of Blueprint Investments, consultants Mark and Mindy Corna, and Brenda Parker of The Columbus Architectural Studio. Lindsay Jones of Blindeye Restoration preserved the kitchen floor created by the artist.