The Truth Booth in Columbus 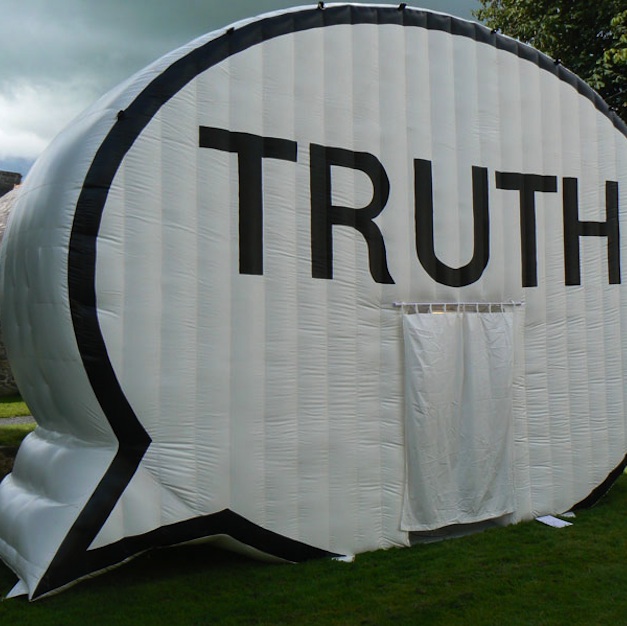 Columbus Museum of Art and The Pizzuti Collection are partnering to bring the Truth Booth to Columbus for just a few days, April 29, 2016 – May 1, 2016.

In Search of the Truth is an inflatable temporary public sculpture—an iconic, 14-feet high speech bubble. Inside is a video recording booth where the public can record two-minute videos as they complete the statement, “The truth is…” The Truth Booth was created by Cause Collective, a team of artists, designers and ethnographers creating innovative art in the public realm. For the past 10 years, Cause Collective has enlivened public spaces by creating dynamic conversations between issues, sites, and audiences. By exploring ideas that shape society, they work to add the “public” back into public space and art. Truth Booth’s 2016 U.S. tour is created by Ryan Alexiev, Hank Willis Thomas, Jim Ricks, and Will Sylvester of Cause Collective.

Record your own “Truth” about any topic in the Truth Booth, which will be installed in the new Walter Wing at Columbus Museum of Art from April 29, 2016 – May 1, 2016.

THE TRUTH BOOTH IN COLUMBUS PREVIEW AND OPENING
Thursday, April 28th, 6:00 PM-8:00 PM
Columbus Museum of Art
Cash bar. This event/public art installation is free and open to the public.